Red Dot Corp., a global manufacturer of HVAC systems for heavy trucks, heavy equipment and military vehicles, was having trouble producing a louvered part efficiently. The process incurred a lot of excess manual handling, which led to many poor-quality parts. So, when Mate Sales Engineer John Nugent asked Red Dot’s production programmer Jericho Abad if he was experiencing any problems, Abad mentioned the louver issue. ugent worked closely with Abad to better understand the situation. Red Dot cut one large sheet of galvannealed steel into 5 smaller pieces. These smaller sheets were loaded onto their punch press to create blanks and holes. The individual blanks were removed from the skeleton and reloaded into the punch press to form the louvers. During this part of the process, some individual parts were reloaded backward or secured in the clamps. The louver tool itself wasn’t spring-loaded. It could stick out about 0.35” (8,89mm) and catch the sheet, which could be ripped from the workholders. Moreover, the tool progressively formed the louvers, which was very slow.

Considering Abad’s suggestions, Nugent worked with Mate’s Application Specialists. They developed a louver tool with a spring-loaded lower, which reduced the load the punch had to absorb. The spring-loaded lower also provided a flat surface to eliminate the possibility of catching the sheet. As a result, Red Dot can load a regular size sheet on the punch press to form all the louvers at once without fear of damage or catching.

Red Dot went from a two-step, eight-hour process to a one-step, 2.5-hour process by using the spring-loaded louver tool. Jericho Abad said that Red Dot’s “new Mate spring-loaded louver tool increased productivity 68% without the hassle of finding a use for the new remnant material.” The new tool allowed them to eliminate the cutting process, and the loading and unloading of sheets, parts and skeletons. It further eliminated remnants from the cutting process. In fact, Red Dot achieved better sheet utilization due to improved sequencing because they can punch farther into the corners.

Abad is impressed with the results, saying, “We just basically set it up, go home and come back in the morning. All we have to do is remove the parts from the punch table.”

Adapted from the article “A New Approach to Forming Louvers,” Dan Davis, The Fabricator, August 2019. 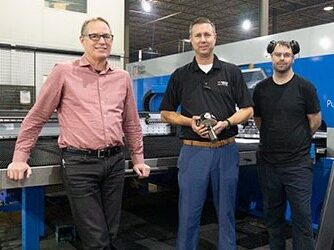